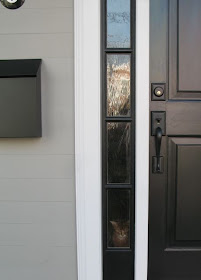 First, you'll notice that I've changed my header.  The change was an experiment to see how the header width affected the width of the entire blog page and, in turn, the size of my photos.  I feel the header better reflects my Urban Cottage, both inside and out, but I'll probably continue to work on it as I experiment with photo editing and the Blogger templates.  Right now I couldn't center my tag line if my life depended on it.  It's very frustrating.
On to more important matters:
All of the new windows and sidelights are installed so I thought I would show everything that's been done one final time...just in time for the holidays as I had hoped.
Let's start inside. 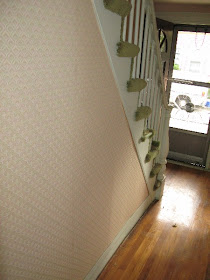 This is the front hall as it looked when I bought the house.  All of that wallpaper was stripped, the green carpeting was ripped out, the floors and stairs were refinished and the newel post and bannister was stripped of its mint green paint. 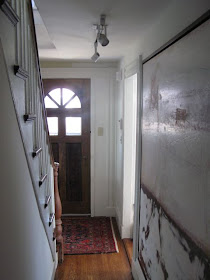 This was the result after that first facelift.  You can see to the left of the front door where the sidelights used to be.  They were filled in with a panel of wood on the inside (where the light switch is). 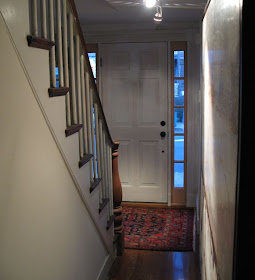 And this is how it looks now.  It's hard to take a photo with the camera pointed toward the light so this photo was shot just after dawn yesterday morning.  The sidelights really open up the space and make it feel larger.  They just need to be primed and painted. 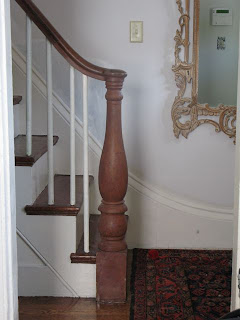 This view is looking into the entryway from the living room after my initial facelift. 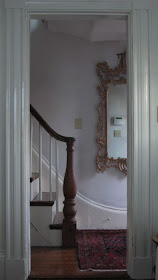 And this is what it looks like now.  The sidelights really bathe this area in light.  Unfortunately, it really highlights 170 years of people moving in and out and I can only imagine how many coats of paint.  I think I'm going to have to strip the paint off all this trim.

This is the view from the other end of the sofa...where I sit and write my blog posts.
Let's head outside. 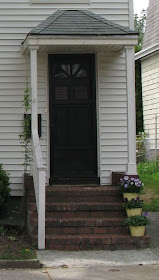 It's hard to imagine this is what the house looked like just over four months ago.  The sidelights had been entirely covered up with shingles and vinyl siding.  This is already a fading memory.

And this is the entry that will welcome my Thanksgiving guests.
(I should note in case you're thinking it, that I hate the natural oak sill under the front door.  I didn't want to try to match the mahogany deck so I told Sam to leave it natural.  I thought it would be darker.  But I think it stands out like a sore thumb.  I think I'm going to paint it a dark gray but I'll need to wait until it's warm enough to sand it down and prime and paint it.  It's easy enough to fix.) 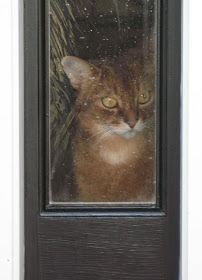 The squirrel patrol is already on the job.  This photo nicely shows the waves and seeds in the glass.  Sam made these sidelights in his workshop using router bits to match the trim on the panels of the door.  They're really beautifully done. 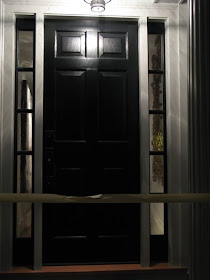 This is what they look like at night with the lights on.  (The deck had just gotten its final coat of finish so the tape is to keep spectators at bay...and rotten children from writing their initials in the finish!) 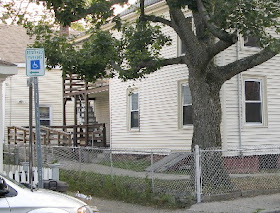 This is the garden side of the house when I became its custodian... 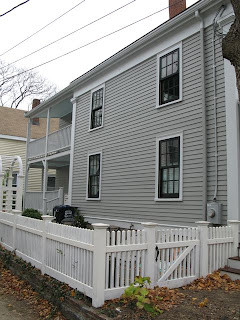 ...and here is now with the new windows installed.  Only these four were replaced because (1) they're the only ones visible from the street and (2) I haven't made definitive plans for the kitchen and the windows may change size or shape.   Or the windows may become french doors.  It's clear I need to do some landscaping over here. 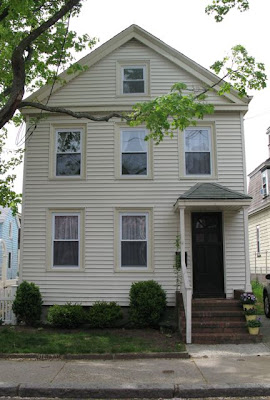 And, finally, here is the front of the house back in April when I was photographing the house for my variance application. 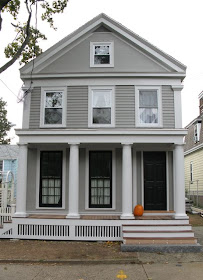 This is what it looked like when you last saw it.  The rest of the windows have been replaced, the sidelights have been installed and deck has been stained. 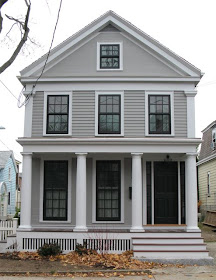 And here it is today.
I'm so thrilled with the windows (save the reality that I have to prime and paint them on the inside); in fact, I'm really thrilled with everything that I chose.  I feel I've prepare this part of the house for its next 170 years of life and I feel extremely fortunate to have been able to make it happen. 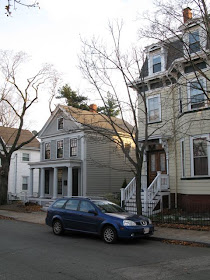 I'm adding this photo a few hours after my original post because I realize that my photos are always so close up, you can't get a good idea of its scale.  Here, in relation to the Victorian next door, you can get a better idea of its small cottage scale.
As I move forward with the inside of the house, I hope that I'm able to translate the feeling of this new exterior to the interior.  I don't know how that will manifest itself but I have plenty of house spirits to guide me.
An Urban Cottage at 11/21/2010 03:10:00 PM
Share